Tafsir of The Holy Quran 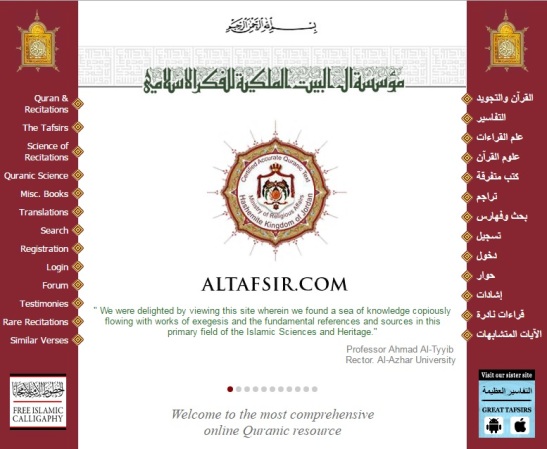 ALTAFSIR.COM is a completely free, non-profit website providing access to the largest and greatest online collection of Qur’anic Commentary (tafsir or tafseer), translation, recitation and essential resources in the world.

It was begun in 2001 by the Royal Aal al-Bayt Institute for Islamic Thought, Jordan. Today the website is fully operational in Arabic and English and provides the original Arabic texts of 150 or more books of Qur’anic Commentary, Interpretation and Explanation (tafsir or tafseer), recitation (tajwid) tutorials and hadith collections, and other fields, pertaining to the study of Qur’anic exegesis. Translations of the meanings of the Qur’an are currently available in 24 different languages, and in several cases more than one translation is available. The site also includes audio Qur’an recitations; resources on Qur’an syntax; resources on the Contexts of Revelation (asbâb al-nuzûl); resources on the meanings of words found in the Qur’an, and other works on the Qur’anic sciences. It contains over a million pages of Qur’anic Commentary and translation. Some of the texts presented here exist only as manuscripts and have never previously been published in book form despite their historical importance and influence. Altafsir.com is thus a complete website for the study of the Qur’anic Sciences.

In addition to presenting the standard Classical and Modern Commentaries on the Holy Qur’an (tafsir or tafseer) texts of all eight schools of jurisprudence, the site also contains works of various mystical, philosophical, linguistic and theological currents. Moreover, the first time in one place, comparative studies between the Shafi‘i, Hanafi, Maliki, Hanbali, Ja‘fari, Zaydi, Ibadi and Thahiri schools can be carried out complete with multi-screen displays and search programs.

Through an enormous scholarly labour, each of the Qur’anic Commentaries (tafsir or tafseer) has been typed in, word by word, individually, and at least triple checked by different teams of scholars—none have been scanned in—in order to make it possible, through the use of the latest technology, to search and cross-reference for single words or groups of words, hadiths, or Qur’anic verses anywhere on website database.

The on-going third and final phase of Altafsir.com will see the addition of English translations of a number of classical Qur’anic commentaries (tafsir or tafseer) specially commissioned by the project, by leading international translators. Prior to AlTafsir.com no complete, unabridged quality translation of a Classical Qur’anic Commentary (tafsir or tafseer) into English had ever been published! AlTafsir.com has commissioned the translations of: (Suyuti and Mahalli’s) Tafsir al-Jalalayn; the Tafsir of Ibn ‘Abbas; theAsbabal-Nuzul of Al-Wahidi; the Tafsir of Al-Tustari; the Tafsir of Baydawi, and the Tafsirof Kashani into English; and the translation of Tafsir, Al-Bahr Al-Madid for Ibn ‘Ajiba’, into English and French. It has also commissioned a modern scientific Tafsir of the Qur’an by Professor Usman Bakr of Malaysia. Future plans include the translation into English of Nasafi’s Tafsir and of the great tafsir, Mafatih al-Ghayb, of Fakhr Al-Din Al-Razi. All the translated Qur’anic Commentaries are unabridged, and totally unchanged apart from corrections in spelling or editing mistakes. AlTafsir.com never adjusts or changes original works, even when they do not reflect the opinions and beliefs of the Royal Aal al-Bayt Institute for Islamic Thought. The reader or scholar can make up their own minds. The mission of Altafsir.com is to give them the complete resources to do that, free of charge, 24 hours a day, 365 days a year, anywhere in the world, at the touch of a button.

Additional resources include a user-friendly interface for the study and comparison of all the established variant readings (qira’at) and tonal keys (maqams) of Qur’an recitation. For students of tajwid and researchers alike, the differences between the Warsh, Hafs and other modes of recitation are a mouse-click away, in the voices of the Islamic World’s most beloved Qur’an reciters. The audio-video format will aid users in memorizing the Qur’an and also in studying and applying the rulings and variations in recitation styles.

Since 2006 Altafsir.com has also become the most popular and most visited Qur’anic Commentary (tafsir or tafseer) website in the world. It is a unique and invaluable Qur’anic studies resource that facilitates a better understanding and appreciation of the Sacred Text of the Islamic faith—the Holy Qur’an. Click here to visit AlTafsir.com

Spiritual Gems is the first ever full translation of arguably the earliest extant mystical commentary on the Qur’an. It was preserved and transmitted by the Sufis of the early centuries of Islam, and is to be found in the 4th-5th/10th-11th century compendium compiled by M.b. al-Husayn al-Sulami (d. 412/1021), in which Ja’far al-Sadiq is one of the most frequently cited authorities. To read from the publisher, Click Here

This is the English translation of the Commentary of the Quran attributed to Imam Abu Muhammad Hasan Al Askari (‘alaihi salam). While many ulama of the Twelver Shia deem it da’eef (weak) other ulama of the Twelver Shia depended on this tafsir and believed certainly it was Imam Al Askari’s tafsir. Those who accept it include Shaikh as-Saduq, Shaikh at-Tabarsi, Al-Muhaqqiq al-Kurki, Al-Munyah, Muhammad Taqiy al-Majlisi, Ibn Shahrashub and Al-Muhaqqiq Agha Buzurgh.   To read online, Click Here 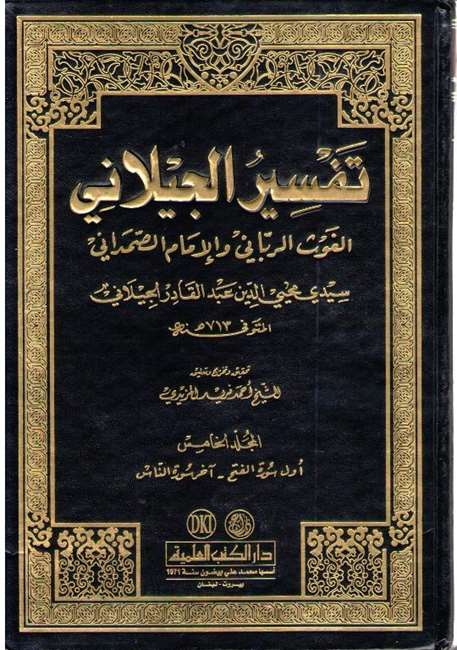 In a five volume set printed with 2 color text, the Tafsir of the Islamic scholar and Sufi ‘Abd al-Qadir al-Jilani (d. 561/1166).  To purchase from an external dealer, Click Here

al-Mizan is a Shi’a Muslim tafsir (or exegesis of the Holy Quran) written by Allamah Sayyid Muhammad Husayn Tabataba’i.

The book consists of 20 volumes originally written in Arabic. More than three editions have been printed in Iran and Lebanon.

Allamah Sayyid Muhammad Husayn Tabataba’i (1892-November 15, 1981) was one of the most prominent thinkers of philosophy and contemporary Shia Islam. He is famous for Tafsir al-Mizan, the Qur’anic exegesis.  To read it online, Click Here