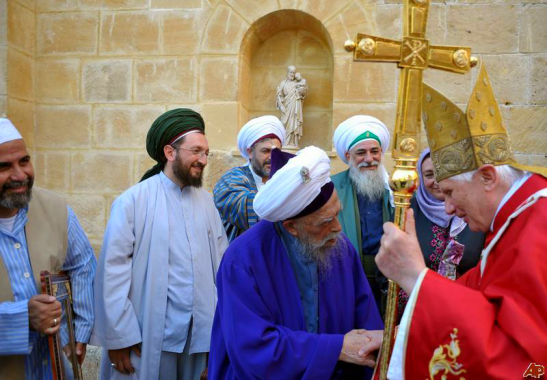 Q. As salamu alaikum! As Shaykh Nazim and you are opposed to democracy, I will not cast a vote in the upcoming GHMC elections. Is this correct or should I just vote for the Muslim candidate instead?

A. Wa alaikum as salam wa rahamtullahi wa barakatuhu. Our position is similar to the Catholics who also follow an Abrahamic religon. Catholics who live in democratic nations do their best to participate socially and politically in their respective nations while maintaining a distinct Catholic identity and set of beliefs all along. Many Catholic lobbies strive to make their nations hear and reconcile with their view point on issues like abortion, gay marriage etc., and participate in the democratic process while at the same time maintaining an open loyalty to the Church and allegiance to the Pope and Vatican City. Vatican City is an absolute monarchy and the Pope an absolute monarch. Similarly, in our view, after the restoration of our Arab caliphate, Muslim citizens living in democratic nations will continue to be loyal to Awliya, Aqtab, Abdaal and Awtad etc., and will have spiritual allegiance to the Arab Hashemite dynastic caliph from the Ahl al-Bayt – who rules an absolute monarchy as an absolute monarch – while at the same time continuing to be outstanding citizens of their respective democratic nations. President John F. Kennedy was a devout Catholic and the President of the United States of America at the same time. There is no issue nor conflict with such a religious and ideological ‘arrangement’ in our view.  The caliphate of the Arabs and Ahl al-Bayt will be restored according to prophesy very soon, perhaps even within the next three years if Allah permits. Arabs will continue to live in Arabia and the Arab Middle East to which they have always been native according to history- while non-Arabs in non-Arab nations. Given Her Majesty’s official royal descent from the House of David, my initial hypothesis was – like al-Mahdi in the Greater Arab Middle East from Mecca/Madinah/Jerusalem-Palestine/Iraq – Jesus would rule the West from Buckingham Palace, as the British monarchy is a heriditary monarchy unlike Vatican City. However, it is quite possible upon his return Jesus will instead possibly make Vatican City centre of his kingdom in the West after his reforms are implemented. Jesus is a literal real person who was bestowed with miracles including the ability to raise the dead. He will return to earth after his descent from the seventh heaven in space according to Sunni Islam as well as Christianity.

If you choose to participate in your democracy, cast your vote for the best candidate.