Nabataean inscription on the blade of the al-Battar sword of the Holy Prophet (S).

“…Make it a point to remove from your minds the great lie told by the enemies of Islam – that the Arabs and early Muslims (Sahabah) were primitive and savages. After the decline of the power of their royal maternal ancestors of Anceint Egypt, the early Arabs (Children of Ismail) like the ‘Hagarenes’ who were also known as Qedarites and Nabateans and Lihyanites- ancestors of the Adnani Arabs – built magnificent cities and a vast empire with Makkah as its capital. Yes. In The Cambridge Ancient History, Nabataens mentioned by Diodorus in his retelling of events that took place in 312 BC are said to be Qedarites [Boardman et al., 1988, p. 148]. Prophets were sent to people who denied Tawhid.  The Arabs were on Tawhid and the religion of their father Abraham and Ishmael until a short time before the Year of the Elephant.  Then, Allah deputed the Seal of Prophets to restore their honor with Tawhid and Risalat and Wiliyat. The glory of Ancient Egypt came to their natural successors the Arabs through the First Lady of the Arabs Sayyida Hajra peace be upon her, who was the daughter of the Pharaoh according to both Arab as well as Judaic sources. The great grandfather of the Messenger of Allah (S) – Sayyidina wa Mawlana ‘Abd al-Muttalib ‘alahi salam – attempted to reunite the Arab empire after rediscovering the Well of Zam Zam and the treasures of Abraham and Ishmael, and this task was completed by his great grandson, the Pride of Arabs (‘Izz al-‘Arab) the Holy Prophet sallallahu alaihi wa sallam.  All Prophets came for this and among the swords of the Seal of Prophets was the al-Battar sword which had early Arab Nabatean inscriptions on it, demonstrating a continuous link to the empire of his holy ancestors.  Even early Quranic texts were recorded in Kufic writing – which in fact, evolved from Nabatean script.  According to Ottoman traditions, ‘Ali ibn Abi Talib was able to read the Nabatean inscriptions found on the case of the Al Battar sword of the Prophet, which is said to be housed in the Topkapi Palace.  Additionally, in Twelver Shi’ism, the tenth Imam; Imam Muhammad al-Taqi, the grandfather of Imam Hasan al-Askari, is described as being endowed with the knowledge of the language of the Nabateans.” 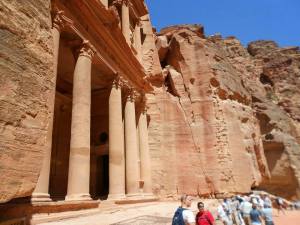 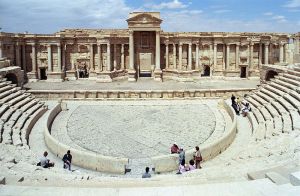 Palmyra, Damascus, Syria, built by the Nabatean Arab Queen Zaynab (Zenobia), was a luxurious city with a lot of constructions, streets, arches, temples, and statues which were built. Queen Zenobia was the daughter of ‘Amr Ibn al-Arabi and ruled Palmyra in a way that astonished both East and West. She was soon fired by the ambition of restoring Arab glory and getting rid of Roman occupation in Syria…. In 268 she decided to conquer all of Rome’s occupied territories in the Arab world. She took over the whole of Syria, conquered Egypt. Queen Zenobia was later defeated and taken captive in Rome, fettered in chains of gold. Her palace was destroyed by the Romans but archaeologists are still excavating to uncover her palace. Some of the ruins that remained is the Baal temple, the Arch of Triumph, the amphitheater, the “Straight Street, the baths, the Congress Council, and the Cemeteries.

According to historians the Arab Queen Zaynab also claimed descent from Seleucid line of the Cleopatras and the Ptolemies – further demonstrating the Arab link to Ancient Egyptian royalty and the Pharaoh dynasties. This in addition to the multiple Arab traditions tracing the descent of the Seal of Prophets (S) through his ancestors back to Idris, who was the builder of the Great Pyramids of Giza. 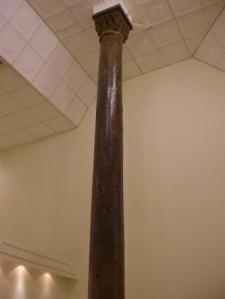 Nabataean motif pillars from inside the Holy Ka’aba from the Makkah Museum, KSA

Nabataean motif pillars still present inside Haramayn Sharifayn at both Makkah and Madinah.