“…He will not be remembered as an oppressor, or someone who caused troubles, or someone who led people to the wrong path. This person spread his hands before our Prophet’s holy grave and made dua…Even in Saudi Arabia there aren’t as many extreme Wahabis or Salafis as there are in those countries. This is an important lesson. This man did a great service. This is big proof against those people who don’t respect or honour our Prophet. The scholars there could have stood up and said that this is wrong. But they didn’t. That means it’s not wrong, not shameful, not against Islam. It is something in Islam. If it wasn’t right, then all the Wahabi scholars there would stand up and say the king did wrong. Since they didn’t, it means the way of Ahli Sunnah Wal Jama’a is correct. The others, who don’t glorify our Prophet, are on the wrong way. May Allah give them correct thinking to come to the right way and do service for their people, for their country. There is a need for this. To help all Muslims to come to the right way will be a big grant for them…We are saying this for occasion of King Abdullah, rahmatullah alayhi, the King of Saudi Arabia. He was very good man, very good king and Allah making him to pass away Friday night. Friday night, it is a very holy night. Who pass away in this night, on this day, be very easy for him to be in grave. Allah, the generosity of Allah, it will be on him. Alhamdulillah, he is coming from the dynasty of Saudi. This dynasty, they were making, of course, not good things because they are taking all the Shareef and killing, and taking from Hijaz, from Hashemi, they throw them out. But Allah, He is able to do everything. Allah make this man to make very good things for Islam also, because he was loving Prophet (sws), respecting Prophet (sws). In his time, it was very smooth, very gentle for Hajjis, for visitors of Prophet (sws). It was not like before. Before they were pushing people, “don’t make this, this is shirk, this is not good, this is haram”. But alhamdulillah, he was coming and standing in front of Prophet (sws) and making dua facing Prophet (sws). And nobody, after this could say anything to the Hajjis. So even this one, it is enough for him. But he make many things also for love of Prophet (sws). And he was happy with end of his life. ” (GrandShaykh Mehmet Effendi, Saltanat.org) 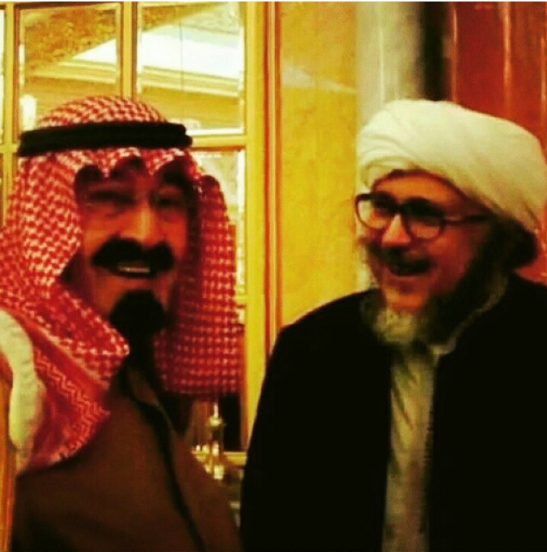 This entry was posted on January 29, 2015 by ASFC in Uncategorized.