Koran should be read at Prince Charles’ coronation says top bishop: Critics attack proposal and accuse Church of England of ‘losing confidence’ in its own traditions 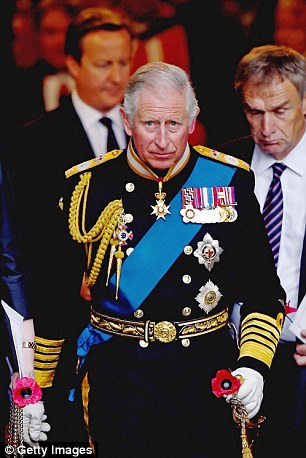 By Steve Doughty for the Daily Mail 18/ 28 /Nov 2014 Prince Charles’s coronation service should be opened with a reading from the Koran, a senior Church of England bishop said yesterday. The gesture would be a ‘creative act of accommodation’ to make Muslims feel ‘embraced’ by the nation, Lord Harries of Pentregarth said. But critics attacked the idea, accusing the Church of ‘losing confidence’ in its own institutions and traditions. Lord Harries, a former Bishop of Oxford and a leading CofE liberal thinker, said he was sure Charles’s coronation would give scope to leaders of non-Christian religions to give their blessing to the new King. The former Bishop of Oxford, who continues to serve as an assistant bishop in the diocese of Southwark, made the suggestion about the Koran during a House of Lords debate. He told peers the Church of England should take the lead in ‘exercising its historic position in a hospitable way’. He said that at a civic service in Bristol Cathedral last year authorities had agreed to a reading of the opening passage of the Koran before the beginning of the Christian ritual. He said: ‘It was a brilliant creative act of accommodation that made the Muslim high sheriff feel, as she said, warmly embraced but did not alienate the core congregation. ‘That principle of hospitality can and should be reflected in many public ceremonies, including the next coronation service.’ Simon Calvert of the Christian Institute think-tank said: ‘Most people will be amazed at the idea that a Christian leader would consider the use of the Koran at a Christian service in a Christian abbey.  People are just so disappointed when senior Church of England figures lose confidence in the claims of the Christian faith.’ Andrea Minichiello Williams, a member of the CofE’s parliament, the General Synod, and head of the Christian Concern pressure group, said: ‘At a time when we are looking at what British values mean, we cannot have values in a vacuum. British values stem from our Christian heritage. ‘We cannot pretend all religions are the same, or have the same benefits and outcomes for the nation.’ Douglas Murray, associate editor of the Spectator, said if Muslims were included in the coronation service, there must be room to for Hindus, Sikhs, and atheists. He added: ‘If there were to be a reading from the Koran at the coronation, surely as a matter of reciprocity, all mosques in the UK should have prayers for the King and the Armed Forces every week at Friday prayers.’ http://www.dailymail.co.uk/news/article-2853638/Koran-read-Prince-Charles-coronation-says-bishop-Critics-attack-proposal-accuse-Church-England-losing-confidence-traditions.html#ixzz3KYiBNb4x

This entry was posted on December 1, 2014 by ASFC in Uncategorized.