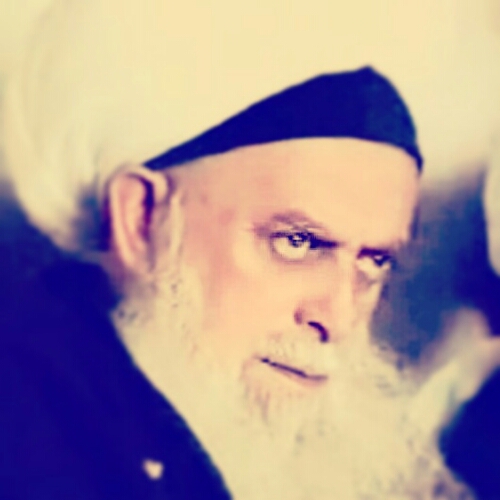 “All the warheads are under the control of Jinns, and the Jinn are under the command of Sayyidina Mahdi ‘alayhi salam.  So nothing will be by chance; it will be only as much as Allah is asking. Everything is just arranged. There is a group of Saints, the Five Qutbs, that look after everything according to the Will of Allah. Nothing on this earth happens by chance or accident. And nothing happens without a reason…”-Mawlana Shaykh Nazim Adil al-Haqqani, ‘Bridge to Eternity’

The 1976 Tehran UFO Incident was a radarand visual sighting of an unidentified flying object (UFO) over Tehran, the capital of Iran, during the early morning hours of 19 September 1976 during the days of the post Qajar, Pahlavi dynasty.

During the incident, two F-4 Phantom II jet interceptors lost instrumentation and communications as they approached, only to have them restored upon withdrawal; one of the aircraft also suffered temporary weapons systems failure, while preparing to open fire.

The incident, recorded in a four-page United States Defense Intelligence Agency (DIA) report distributed to at least the White House, Secretary of State, Joint Chiefs of Staff,National Security Agency (NSA) and Central Intelligence Agency (CIA), remains one of the most well-documented military encounters with anomalous phenomena in history, and various senior Iranian military officers directly involved with the events have gone on public record stating their belief that the object was not of terrestrial origin.

At approximately 0030 hours local time(2100Z), 19 September 1976, the Imperial Iranian Air Force command post at Tehran received four reports by telephone, from civilians in the Shemiran city district, of unusual activity in the night sky. The callers reported seeing an object similar to a star, but much brighter.

When the command post found no helicopters airborne to account for the reports, they called General Yousefi, assistant deputy commander of operations. General Yousefi at first said the object was only a star, but after conferring with the control tower at Mehrabad International Airport and then looking for himself to see a very bright object larger than a star, he decided to scramble one F-4 Phantom II jet fighter from Shahrokhi Air Force Base in Hamadan, approximately 175 miles (282 km) west of Tehran.

At 0130 hours (2200Z), the F-4, piloted by Captain Mohammad Reza Azizkhani was launched and proceeded to a point 40 nautical miles (74 km) north of Tehran. It was noted that the object was of such brilliance that it could be seen from 70 miles (110 km) away. When the aircraft approached to approximately 25 nautical miles (46 km) from the object, the jet lost all instrumentation and communications capabilities, prompting Azizkhani to break off the intended intercept and turn back toward Shahrokhi; upon the evasion, both systems resumed functioning.

At 0140 hours, a second F-4 was scrambled, piloted by Lieutenant Parviz Jafari and Lieutenant Jalal Damirian. Jafari would eventually retire as a general and participate on 12 November 2007, at a National Press Club conference demanding a worldwide investigation into UFO phenomena. Jafari’s jet had acquired a radar lock on the object at 27 nautical miles (50 km) range. The radar signature of the UFO resembled that of a Boeing 707 aircraft. Closing on the object at 150 nautical miles (280 km) per hour and at a range of 25 nautical miles (46 km), the object began to move, keeping a steady distance of 25 nautical miles (46 km) from the F-4. The size of the object was difficult to determine due to its intense brilliance. The lights of the object were alternating blue, green, red, and orange, and were arranged in a square pattern. The lights flashed in sequence, but the flashing was so rapid that they all could be seen at once.

While the object and the F-4 continued on a southerly path, a smaller second object detached itself from the first and advanced on the F-4 at high speed. Lieutenant Jafari, thinking he was under attack, tried to launch an AIM-9 sidewinder missile, but he suddenly lost all instrumentation, including weapons control, and all communication. He later stated he attempted to eject, but to no avail, as this system, which is entirely mechanical, also malfunctioned. Jafari then instituted a turn and a negative G dive as evasive action. The object fell in behind him at about 3 to 4 nautical miles (7.4 km) distance for a short time, then turned and rejoined the primary object.

Once again, as soon as the F-4 had turned away, instrumentation and communications were regained. The F-4 crew then saw another brightly lit object detach itself from the other side of the primary object and drop straight down at high speed. The F-4 crew expected it to impact the ground and explode, but it came to rest gently. The F-4 crew then overflew the site at a decreased altitude and marked the position of the light’s touchdown. Jafari would later comment that the object was so bright that it lit up the ground and he could see rocks around it. The object had touched down near Rey Oil Refinery on the outskirts of Iran. Then they landed at Mehrabad, noting that each time they passed through a magnetic bearing of 150 degrees from Mehrabad, they experienced interference and communications failure.

A civilian airliner that was approaching Mehrabad also experienced a loss of communications at the same position relative to Mehrabad. As the F-4 was on final approach, they sighted yet another object, cylinder-shaped, with bright, steady lights on each end and a flashing light in the middle. The object overflew the F-4 as they were on approach. Mehrabad tower reported no other aircraft in the area, but tower personnel were able to see the object when given directions by Jafari. Years later, the main controller and an investigating general revealed that the object also overflew the control tower and knocked out all of its electronic equipment as well.

The next day, the F-4 crew flew out in a helicopter to the site where they had seen the smaller object land. In the daylight, it was determined to be a dry lake bed, but no traces could be seen. They then circled the area to the west and picked up a noticeable “beeper” signal. The signal was loudest near a small house, so they landed and questioned the occupants of the house about any unusual events of the previous night. They reported a loud noise and a bright light like lightning.

Further investigation of the landing site, including radiation testing of the area was apparently done, but the results were never made public. Since this event occurred before the fall of the Shah, any records in Tehran may be lost.

In the 1 October 1976 issue of the Iran Timesfrom Washington, D.C., an apparent firsthand account from Lt. Jafari, the pilot of the second jet interceptor, was published, based on a tape of the actual pursuit. The aircraft flew towards Tehran at over the speed of sound. Jafari said that on seeing him coming, the UFO increased its speed. “It was half the size of the moon as seen from earth,” he said. “It was radiating violet, orange, and white light about three times as strong as moonlight.”Jafari was ordered to return to base if he was unable to get near, and Jafari cut off pursuit. As he was returning, he “told air controllers that the UFO had doubled back on its pursuers, and he was in danger of being forced down. ‘Something is coming at me from behind. …I think it is going to crash into me. It has just passed by, missing me narrowly…’ The disturbed voice of the pilot was clear on the tape.” The article also recounted how the pilot spoke of a “bright round object, with a circumference of about 4.5 meters, leave the UFO.” It also said that the authenticity of the object had already been confirmed by the two F-4 pilots, several control tower operators, and witnesses on the ground who reported a “bright body” flit across the sky while others reported seeing “some bright thing” fall from the sky. 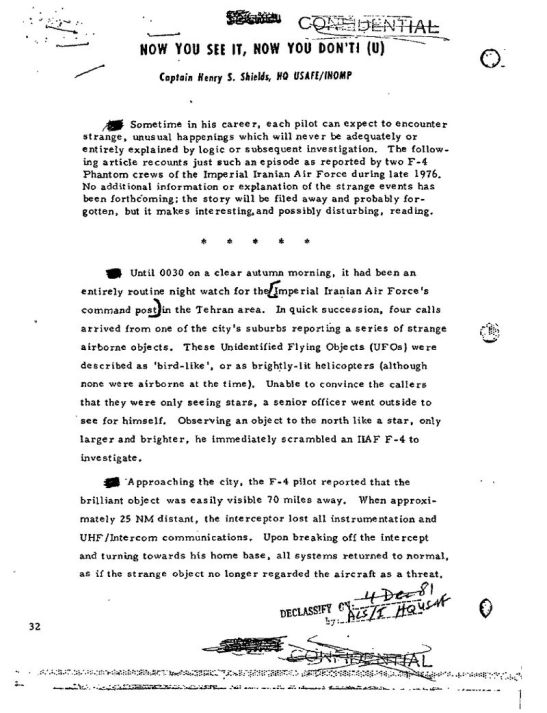 This entry was posted on September 21, 2014 by ASFC in Uncategorized.