King and Country The Hashemite Solution for Iraq By Bernard Lewis and R. James Woolsey 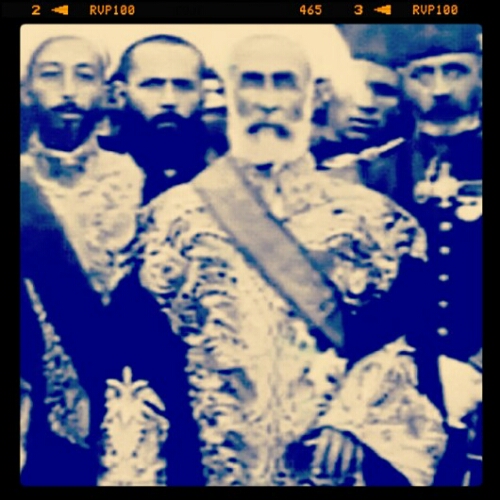 The first Caliph from the House of ‘Ali ibn Abi Talib since al-Hasan ibn ‘Ali (d.670), and first Arab-Hashemite Caliph since the fall of the Abbasid Caliphate in 1258; His Exalted Highness Sayyid Hussein bin Ali, GCB, the Sharif of Mecca, Emir of Mecca (1908-1917), King of the Hejaz, and King of the Arabs, Caliph of the Prophet Muhammad (sallallahu 'alayhi wa aalih).

Following the recent passage of the Security Council resolution on Iraq, the key issue continues to be how quickly to move toward sovereignty and democracy for a new government. The resolution’s call for the Iraqi Governing Council to establish a timetable by Dec. 15 for creating a constitution and
a democratic government has papered over differences for the time being.

But there are still substantial disagreements even among people who want to see democracy and the rule of law in Iraq as promptly as possible. The U.S. sees the need for time to do the job right.

France, Germany and Russia want both more U.N. participation and more speed–a pair of mutually exclusive objectives if there ever was one. Some Iraqis call for an elected constitutional convention, others for a rapid conferring of sovereignty, some for both. Many Middle Eastern governments oppose democracy and thus some support whatever they think will fail.

There may be a path through this thickening fog, made thicker by the rocket and suicide-bombing attacks of the last three days. It is important to help Ambassador Paul Bremer and the coalition forces to establish security. But it is also important to take an early step toward Iraqi sovereignty and to move toward representative government. The key is that Iraq already has a constitution. It was legally adopted in 1925 and Iraq was governed under it until the series of military, then Baathist, coups began in 1958 and brought over four decades of steadily worsening dictatorship. Iraqis never chose to abandon their 1925 constitution–it was taken from them. The document is not ideal, and it is doubtless not the constitution under which a modern democratic Iraq will ultimately be governed. But a quick review indicates that it has some very useful features that would permit it to be used on an interim basis while a new constitution is drafted. Indeed, the latter could be approved as an omnibus amendment to the 1925 document. This seems possible because the 1925 Iraqi constitution–which establishes that the nation’s sovereignty “resides in the people”–provides for an elected lower house of parliament, which has a major role in approving constitutional amendments. It also contains a section on “The Rights of the People” that declares Islam as the official religion, but also provides for freedom of worship for all Islamic sects and indeed for all religions and for “complete freedom of conscience.” It further guarantees “freedom of expression of opinion, liberty of publication, of meeting together, and of forming and joining associations.” In different words, the essence of much of our own Bill of Rights is reflected therein.

We need not shy away from the 1925 constitution because it establishes a constitutional monarchy.

Understandings could readily be worked out that would not lead to a diminution of Amb. Bremer’s substantive authority in vital areas during the transition- some ministries may, e.g., transition to Iraqi control before others. In the document as it now stands the monarch has some important powers since he appoints the government’s ministers, including a prime minister, l and the members of the upper house, or senate. Many of these and other provisions would doubtless be changed through amendment, although the members of the current Governing Council might be reasonably appointed to some of these positions on an interim basis. Some new features, such as explicit recognition of equal rights for women, a point not clear in the 1925 document, would need to be adopted at the outset. During a transition, pursuant to consultations with Amb. Bremer and with groups in Iraq, the king could under the constitution appoint ministers, including a prime minister, and also adopt provisional rules for elections. The elected parliament could then take a leading role in amending the constitution and establishing the rules for holding further elections.

Using the 1925 constitution as a transitional document would be entirely consistent with permanently establishing as head of state either a president or a monarch that, like the U.K.’s, reigns but does not rule.

It is worth noting that monarchy and l democracy coexist happily in a number of countries. Indeed, of the nations that have been democracies for a very long time and show every sign that they will remain so, a substantial majority are constitutional monarchies (the U.S. and Switzerland being the principal exceptions). And we should recall how important King Juan Carlos was to the transition from fascism to democracy in Spain. As odd as the notion may seem to Americans whose national identity was forged in rebellion against George III, there is nothing fundamentally undemocratic about a limited monarchy’s serving as a transitional, or even a long-term, constitutional structure in Iraq or any other country.

Selecting the right monarch for the transitional government would be vitally important.

Conveniently, the 1925 constitution provides that the people of Iraq are deemed to have “confided … a trust” to “King Faisal, son of Hussain, and to his heirs….” If the allies who liberated Iraq recognized an heir of this Hashemite line as its constitutional monarch, and this monarch agreed to help bring about a modern democracy under the rule of law, such a structure could well be the framework for a much smoother transition to democracy than now seems at hand.

The Sunni Hashemites, being able to claim direct descent from the Prophet Mohammed, have historically been respected by the Shiites, who constitute a majority of the people of Iraq, although the latter recognize a different branch of the family. It is the Wahhabis of Saudi Arabia, not the Hashemites, who have been the Shiites’ persecutors.

The respect enjoyed by the Hashemites has been earned. They have had a generally deserved reputation for tolerance and coexistence with other faiths and other branches of Islam. Many Iraqis look back on the era of Hashemite rule from the 1920s to the 1950s as a golden age. And during the period of over 1,000 years when the Hashemites ruled the Hejaz, wherein the Muslim holy cities of Mecca and Medina are located, they dealt tolerantly with all Muslims during the Haj, or annual pilgrimage. Disagreements and tension under Hashemite rule have never come close either to the bloody conflicts of many centuries’ duration in Europe between Catholics and Protestants or to the massacres and hatred perpetrated by the Wahhabis and their allies in the House of Saud.

Recently in a brilliant essay in the New Republic, Nobel Prize winner Amartya Sen has pointed out that tolerance and “the exercise of public reason” have given democracy solid roots in many of the world’s non-European cultures, and that balloting must be accompanied by such local traditions in order for democracy and the rule of law to take root. The legitimacy and continuity which the Hashemites represent for large numbers of people in the Middle East, and the tolerance of “public reason” with which they have been associated, could provide a useful underpinning for the growth of democracy in Iraq.

Historically, rulers in the Middle East have held office for life and have nominated their successors, ordinarily from within the reigning family. This ensured legitimacy, stability and continuity, and usually though not invariably took the form of monarchy. In the modern era succession by violence has sadly become more prevalent. It would be reasonable to use the traditional Middle Eastern concepts of legitimacy and succession and to build on the wide and historic appreciation for the rule of law and of limited government to help bring about a transition to democracy. The identification of legitimacy with the Western practice of balloting has now occurred in many cultures around the world, but it may well occur sooner in Iraq if it is developed at least initially as an expanding aspect of an already legitimate constitutional order.

Some contend that a process that gave the U.N. a central role would somehow confer legitimacy. We are at a loss to understand this argument. Nearly 40% of the U.N. members’ governments do not practice succession by election. In the Middle East only Israel and Turkey do so. Why waste time with U.N. member governments, many of them nondemocratic, working out their differences–and some indeed fundamentally oppose democracy in Iraq–when the key parties who need to do that are the Iraqis? Besides, real legitimacy ultimately will come about when Iraq has a government that “deriv[es] its just power from the consent of the governed.” During a transition in which Iraq is moving toward democracy, a government that is operating under its existing constitution, with a monarch as called for in that document, is at least as legitimate as the governments of U.N. members that are not democracies at all.

Much would hinge on the willingness of the king to work closely and cooperatively with Amb. Bremer and to appoint a responsible and able prime minister. The king should be a Hashemite prince with political experience and no political obligations or commitments. In view of the nation’s Shiite majority, the prime minister should be a modern Shiite with a record of opposition to tyranny and oppression. Such leaders would be well-suited to begin the process that would in time lead to genuinely free and fair elections, sound amendments to the 1925 Iraqi Constitution, and the election of a truly representative governing body. We would also strongly suggest that the choices of king and prime minister be made on the basis of character, ability and political experience–not on the basis of bias, self-interest, grudges or rivalries held or felt by some in the region and indeed by some in the U.S. government.

Mr. Lewis is a professor emeritus at Princeton and the author, most recently, of “The Crisis of Islam” (Modern Library, 2003). Mr. Woolsey is a former director of the CIA.