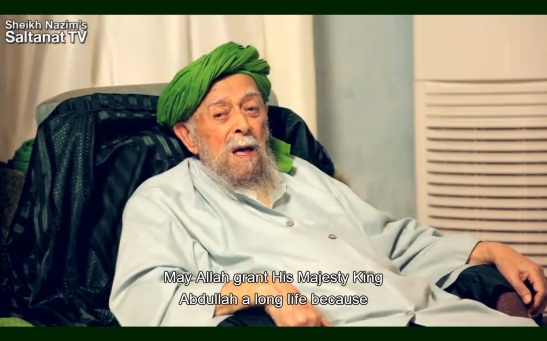 “Well done, Jalatil Malik, His Majesty the King of Hejaz, that he declared, “We are Muslims. We don’t follow this, or that one, we follow the Qur’an, we follow the Shari’at i-Muhammadiyya“. Well done! May he be granted a long life. I am very happy. May Allah grant His Majesty King Abdullah a long life because he glorified the Shari’at of Islam. Well done! Fatiha”-Mawlana Shaykh Nazim Adil al-Haqqani, August 17th, 2013

On Friday King Abdullah of Saudi Arabia voiced his support for the military leadership of Egypt and spoke of fighting against terrorism, a reference to the Muslim Brotherhood. Saudi pledged $5 billion in aid to Egypt after the ousting of President Mohamed Morsi.

Saudi King Abdullah called on Arabs on Friday to stand together against “attempts to destabilise” Egypt, in a message of support for the military leadership and an attack on the Muslim Brotherhood.

“The Kingdom of Saudi Arabia, its people and government, stood and stands today with its brothers in Egypt against terrorism,” he said in a message read out on Saudi television, in an apparent reference to continuing clashes between the Muslim Brotherhood and police.

“I call on the honest men of Egypt and the Arab and Muslim nations… to stand as one man and with one heart in the face of attempts to destabilise a country that is at the forefront of Arab and Muslim history,” he added.