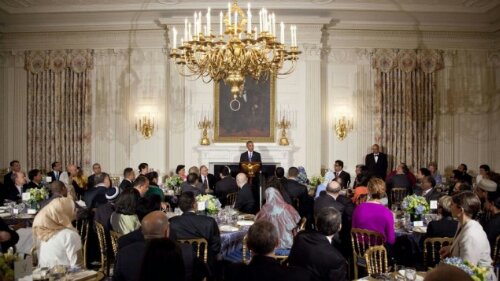 O our Lord, may You make us from those who embrace Islam. You are Al-Qadiru Al-Muqtadir.  For the honour of Your Habib, for the honour of the tajalli in this holy month; may what these unbelievers take pride in disappear in front of the hurricane of Islam, like autumn leaves.

O people! Pay attention, listen. Islam has started to blow, like a hurricane that cannot be withstood. It is coming. It will sweep away anyone who comes against it.

O our Lord, may You not make us from those who come against it.

Go ahead O Shah Mardan! Make us from who go in Your Way. Allahu Akbar wa liLlahi l-Hamd. Fatiha.

Bravo to Obama! I made a special prayer for him. I won’t make him fly away (perish) in front of the hurricane of Islam. There are those who protect him.

I am shaking, it gives such an ajaib feeling, an astonishing hal…