Your Majesty:
Greetings & as salamu alaikum!

My name is Sayyid Ahmed Amiruddin.  I am a born Canadian Muslim, of Arab ancestry.  I write to you in response to the more recent widely publicized photos and news reports over the internet, of the re-planning of the holy cities of Mecca and Medina, the Haram extensions, and an awarded contract by a Canadian construction firm, thereby making my concerns relevant as a Canadian.

According to the American based PBS, “much of historic Mecca has been raised to the ground”. The Independent from the UK reports, “Islam’s holiest site ‘turning into Vegas”. Of these news reports, the most disturbing is from The New Republic, which states, “The house of Khadija today is the site for, among others, a public toilet facility”.

International law defines cultural genocide as  the deliberate destruction of the cultural heritage of a people or nation for political, military, religious, ideological, ethnic, or racial reasons.  Your Majesty, there can be no doubt that what is taking place in the holy cities by way of destruction of Arab heritage sites, is a cultural genocide! The common denominator in all of the destroyed sites is they belong to  heroes of the Quraysh tribe in general, and to the Hashemites in specific.

While I do comprehend the history of the Royal Hashemite Family of Jordan in the holy cities, and why this history in specific justifies perhaps for the current Custodians to see all traces of physical history which links the Hashemites, and their tribe of the Quraysh to the holy cities erased, I am dumbfounded by the lack of international attention being paid to this cultural genocide!

I advocate, the only legal course of action which would be heard by the international community, and could be argued on non-religious grounds, would be protest against the destruction coming from the Royal Family in Jordan, who have a history in these two holy cities, to UNESCO, on the grounds of cultural-genocide.

My aim here is not to speak against any government, nor challenge its position of authority, nor am I trying to ask you to do such things.

As His Majesty is better aware, for Arabs, and Muslims, the blessings for being connected to honouring the Holy Ka’aba, and Mecca specifically include God’s protection from fear, and poverty as Surah al-Quraysh demonstrates.

The history of Mecca is being destroyed as we read this. As the Arab, and Muslim world gets further from honouring Mecca, it gets further from God’s covenant of protection. Today, as the Arab-Spring demonstrates, we are witnessing an unprecedented rise in fear, and poverty, precisely the two things the God of Abraham made a covenant with the Arabs against, in compensation for honouring His House in Mecca.

Anti-Arab, and anti-Islam sentiment throughout the world, and in Canada, is on the rise. This sentiment is resulting in discrimination against Arabs in all walks of life, and Muslims in general, who profess faith in the universally sent Prophet from the descendents of Ishmael, thereby also fueling fear, and poverty for Arabs, and Muslims.

Canadians, our law enforcement agencies, and our members of parliament, know very little about the Arab people, and their common history with the English, tracing back to Abraham.

In fact, we found most of our media do not realize anti Arab sentiment, is actually also a form of anti-Semitism, since Arabs too are a Semitic people!

Experience demonstrates the only practical hope for building bridges, in order to prevent discrimination causing mistrust, is to promote mutual interaction, and trust through trade. As such, we support the Jordan-Canada Free Trade Agreement, but call on Your Majesty to do more to promote ties between our countries!

Canada and Jordan are both countries who have been founded on the grounds of love. For Canadians, our heritage is defined by our historic ties to our royal family. The core value of love for our monarchy is the main value which historically defined us as Canadian, and distinguished us from the Americans. We share this concept and value with the great people of Jordan. Additionally, for Christians and Muslims in both countries, love for the monarchy (Ahl al-Bayt) is also the most important pillar of their faith.

In order to address the rising tide of anti-Arab and anti-Muslim sentiment, promoting tourism to the Hashemite Kingdom of Jordan in Canada, and thereby allowing Canadians to visit sites of ancient Arab civilization like Petra, built by the great Nabateans, from whom the Prophet Muhammad, and his clan of the Hashemites, and tribe of Quraysh descend, according to the historian Ibn Ishaq, would do wonders.

Canadians and Jordanians share so much in common in terms of our heritage, and the sources of our cultures. Both of our monarchies descend from a common ancestor; Abraham. Experiencing the Hashemite Kingdom, and Petra, would specifically help erase negative stereotypes of the Middle East, Arabs, Islam, and the Prophet Muhammad among Canadians.

I have raised two core issues in this letter to His Majesty.  First, the cultural genocide in Mecca, and what I feel His Majesty’s government needs to do to prevent it.  Second, the rise in anti-Arab and anti-Islam sentiment in Canada, and how I feel better ties between our countries, and tourism to the Hashemite Kingdom of Jordan could address this.

Thank you, and Eid Saeed in advance. 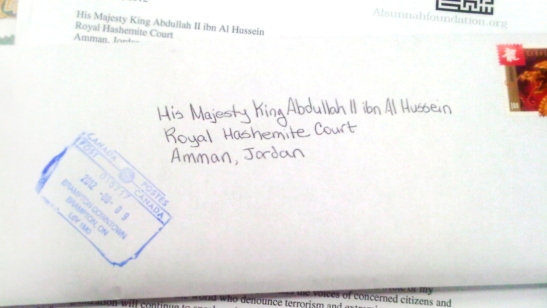 This entry was posted on October 10, 2012 by ASFC in Ahmed Amiruddin, Political Leaders.