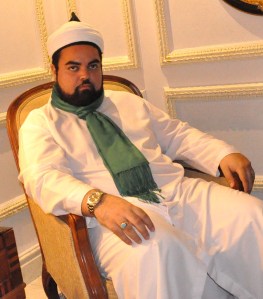 Transcript of the Juma Khutbah delivered on 17/08/2012 at Jamia Riyadh ul-Jannah, Mississauga:
As salamu alaikum!

I wish to start by sharing this saying attributed to Imam al-Husayn (rad):

Today, we mark the Juma tul-Wida, the last Friday for this Ramadan.  As the month of Ramadan, the month of Nuraniyyat, purity, guidance, and mercy, leaves us, we are saddened.  People around the world express this in different ways, but the sentiment is common among all believers.

Ramadan is the month of Rabbaniyyat, the month of Nuraniyyat, wherein humans are allowing the soul, and not the body, to dictate their behaviour during the prescribed fasting hours.  We refrain from eating, drinking, relations with our spouses, and from sleeping as well.

By the end of this month long exercise, humans are conditioned to become more Rabbani, more Nurani, or in English, more God-ly.

It was this month, and the abandoning of the actions which differentiate Bashr, or the human being, from Nur, or the Divine, like eating, sleeping, procreating etc., for the soul, which brought forth the Nurani existence in Prophets, and depleted their Bashriyya existence.

The Chief of the Prophets, who experienced this state, in its most perfect form, at a level which is unmatched by creation, since the beginning and past the end, is the Haqiqat, or spiritual state which would overcome Rasulullah (sallahu alai wa aalihi wa sallam) in this month.  This haqiqat, hal, or spiritual state, would engulf the entire Bashari existence of the Holy Prophet (S), to the point, that on the Night of Power, after years of fasting, and conditioning of his bodily existence, or Bashariyya existence, the Ruh descended on him (sallallau alaihi wa sallam), and his physical existence disappeared, his Bashari existence disappeared, and he entered the state, or hal of “Wa ma yan tiqu a nil hawa…Nor does he speak from himself, it is revelation We send on Him”, and to the state of “Man yu te ul Rasula fa qad ata Allah”, where following Him now was equated in the Quran with literally following Allah.

The Holy Prophet (S) reached such a level of Perfect Merging into the Divine, by his fasting in this holy month, that on the Night of Power Layla tul-Qadr, revelation began, where it was being said, this is not Muhammad ibn ‘Abdullah (S) speaking, it is now Allah, literally speaking as Muhammad (sallahu alaihi wa sallam), meaning, Muhammad (S), in this state of perfect Nuraniyya, is the Rasul, the Medium, who Allah speaks through.  Allahu Akbarul Akbar!

Our fasting is in emulation of the fasting practice of the Prophet (S), and to reach this state, or Hal, to become Nurani, and less Bashri, the nations before us fasted as well, because they were informed, the Most Perfect Man, the Pride of Creation, will fast when he appears on earth, in this month, and it will result in the descending of the Ruh on him, which will “Allamal insaana bil qalam, Allamal insana ma lam ya’lam”.  The Prophet’s Bashari existence will be extinguished on a particular night in this month, the Night of Power, and he will become one with his Nurani existence, he is Nur Muhammad!

This month, in order to become Nurani, we are ordered as a pillar of our faith to fulfill our Zakah obligations!  Only after fulfilling our obligation of Zakat al-Fitr in this month, is our exercise of Nuraniyyat complete, as per the practice of the Light of the Throne, the Pride of Creation’s recorded guidance.  We celebrate Eid then, first in honour of the Nuraniyyat which came on the Bashariyyat of the Holy Prophet (S) in this month, through fasting, which resulted in revelation, and second, to give thanks, that in emulation of the Pride of Creation (S), we too were awarded the secrets to becoming Nurani, through the obligations of this month.

May Allah open on our hearts ma’rifat of the Haqiqat Muhammadiyya!

This entry was posted on August 17, 2012 by ASFC in Ahmed Amiruddin, Spiritual Experiences and tagged Friday, Juma, Sermon, tul, Wida.