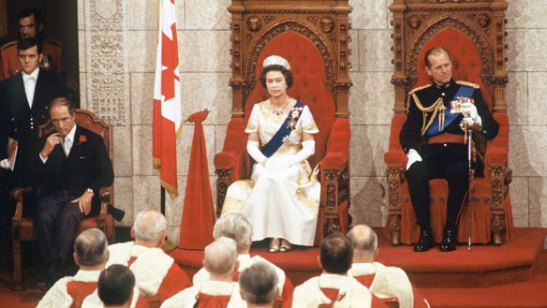 TORONTO – Depending who you ask, the Conservative government’s high-profile attempts to strengthen Canada’s ties to the monarchy over the past year are either a savvy attempt to lure votes or a finger in the eye of Quebec.

Whatever the pundits may think, however, they agree on one thing — the strategy is rooted more in a vision for the country’s future than deference for its past.

Political observers of all stripes believe the revival of interest in Canada’s colonial history is part of a broader Conservative effort to rekindle patriotism and reshape Canada’s culture more in the government’s own image.

Tom Flanagan, a former adviser to Prime Minister Stephen Harperwho now teaches at the University of Calgary, said that vision took root many years ago — and originated at the top.

“Stephen once said to me that a conservative party in any country ought to be party of patriotism,” Flanagan said in an email.

“He is now creating a conservative version of Canadian patriotism.”

Harper’s brand of national pride relies heavily on elements common to many right-wing political movements, including unwavering support for the military and a push to lay claim to the country’s far-flung northern regions, Flanagan said.

But strong affiliation with the monarchy is another key building block of that vision, one that received considerable attention over the past 12 months.

Ottawa greeted news of Prince William’s engagement with enthusiasm, issuing a silver and crystal commemorative coin in honour of the event. Harper himself was slated to attend the nuptials and was prevented only by a federal election.

When the Duke of Cambridge and his new bride Kate made their inaugural visit to Canada as a married couple, the government spared no effort in promoting their visit. Officials even whisked the newlyweds to Harper’s personal retreat at Harrington Lake, Que., for a reprieve from the unrelenting public spotlight.

The most controversial move, however, came in August when the government rechristened Canada’s military institutions to reflect their royal heritage.

The air and maritime divisions of the armed forces both had the word “royal” added back into their title, resurrecting the nomenclature last used in the 1960s.

Opponents decried the move as a needless expense — the government has resisted releasing the cost of the switch — and a retrograde step.

Carolyn Harris, a Queen’s University PhD candidate specializing in the monarchy, said the move marked a surprising about-face for a government that initially took a more diffident approach to the royal family.

Harris said the government had deliberately refrained from inviting royal representatives to the anniversary of the founding of Quebec City in 2008, adding the move would have been politically damaging.

Harper was focused on wooing the Francophone vote at the time, and Harris said a royal presence would have been perceived as a slap in the face by the many Quebecers who regard the royals as a symbol of an oppressive colonial past.

That priority has clearly shifted now, she said, adding the Tories have done more than any other modern Canadian government to foster royal connections by promoting the monarchy’s presence in the country, both on state and charitable visits.

“It’s difficult to tell what approach the Conservative government may have going forward, but they certainly seem to be encouraging royal visits and royal involvement in Canadian institutions,” she said.

The Department of Canadian Heritage declined requests for an interview, but a spokeswoman emphasized the Queen’s role as Canada’s head of state in an email.

Bryan Evans, associate professor of politics at Ryerson University, said the Conservative government’s growing emphasis on royal involvement is just one phase of a project to shift Canadian society in a new direction.

By emphasizing English symbols at the expense of French-Canadian history and making them the focus of the Canadian narrative, Evans said the government is trying to undercut the traditions of bilingualism and multiculturalism that flourished under generations of Liberal leadership.

“This is very much an ideological, cultural campaign,” he said. “It’s not so much about the monarchy in and of itself. It’s about a reshaping of Canadian identity along more Conservative lines.”

Flanagan dismissed the notion that Harper was trying to uproot the Liberal legacy, but acknowledged it will take a back seat to the Prime Minister’s emerging narrative.

“Except for anti-Americanism, he has not repudiated the Liberal version of patriotism, but he is layering the Conservative elements on top,” he said. “Get used to it.”

OTTAWA — The Harper government has hired a consultant to inject a little war into this year’s Canada Day bash on Parliament Hill.

A Toronto theatre expert has been asked to find ways to insert a War of 1812 commemoration into the July 1st festivities that typically include pop music, dance and pyrotechnics.

“I do big-ass special events all the time, so they asked me to do that,” artistic producer Paul Shaw said in an interview. “It’s sort of tricky to do a War of 1812 theme when you’ve got so many modern things in and around it.”

The Conservative government, which has been promoting Canada’s military culture and heritage, has earmarked money and resources throughout the year to commemorate the bicentennial of the outbreak of War of 1812 in North America.

The hostilities led to a stalemate almost three years later between the United States and Britain’s budding settlements in Canada, and some historians consider the war a pivotal moment in Canadian nationhood, though it is little known outside academia.

The Canadian Heritage Department normally injects patriotic themes into the Canada Day noontime show on Parliament Hill, giving the National Capital Commission a free hand to organize the evening show with singers and fireworks in a party atmosphere.

But a recently posted document indicates that the war theme will appear in both shows.

“The events on Parliament Hill also present a key opportunity of the federal government to foster enthusiasm and excitement around other significant events,” says a tender document from the commission.

“In 2012, the Government of Canada is commemorating the War of 1812 and this theme must be incorporated in both the Noon and Evening Shows.”

Last year, the noon show plans were carefully vetted by the Prime Minister’s Office, a May 13 briefing note to the prime minister shows. Prince William and Catherine, the Duke and Duchess of Cambridge, attended and the prince gave a short speech praising the work of the military. 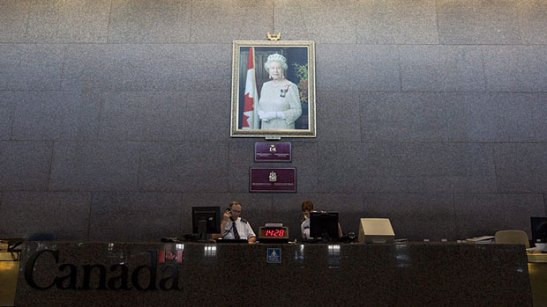 Immigration Minister Jason Kenney says a directive to Canadian embassies to display a portrait of the Queen is nothing new and is in keeping with the government’s policy to acknowledge Canada’s head of state.

“We’re talking about the head of state. I think virtually every country has a picture of their head of state in their missions abroad,” Kenney told reporters Thursday in Ottawa before a meeting of Conservative MPs.

“Virtually all of the Canadian missions I’ve been to already have a picture of our head of state and this just confirms the policy, I think, for the few missions that don’t. So there’s a consistency. I think consistency makes sense.”

Foreign Affairs Minister John Baird said much the same, telling CBC News, “It was already there. There isn’t much to say.”

A spokesman for Baird told The Canadian Press that Canadian missions were instructed this month to hang the Queen’s portrait.

Prime Minister Stephen Harper’s government has taken several steps recently to entrench the monarchy as one of the country’s most important heritage symbols.

Late last month, the Tories renamed the Maritime Command and Air Command the Royal Canadian Navy and Royal Canadian Air Force, restoring names that had been in use before a change in 1968.

In late June, Baird ordered two historic paintings by Quebec master Alfred Pellan replaced with a portrait of the Queen in the reception area of his department. The new “Sovereign’s Wall” was designated in time for the royal visit of the Duke and Duchess of Cambridge in July.

While some have welcomed the moves amid a royal visit this summer and in advance of the Queen’s diamond jubilee next year, others, particularly in Quebec, have criticized them as a return to colonialism.

British Israelism (also called Anglo-Israelism) is the belief that people of Western European descent, particularly those in Great Britain, are the direct lineal descendants of the Ten Lost Tribes of Israel. The concept often includes the belief that the British Royal Family is directly descended from the line of King David. There has never been a single head or an organisational structure to the movement. However, various British Israelite organisations were set up across the British Commonwealth and America from the 1870s, and many still continue to exist.   Adherents may hold a diverse set of beliefs and claims that are ancillary to the core genealogical theory, however there are central tenets all British Israelites follow, including Two House Theology which is the core essence of British Israelism. A central teaching of the British Israelites’ Two House Theology is that while Jews are considered to be Israelites, not all Israelites are considered to be Jews. British Israelites believe that Jews descend only from Judah (and the tribe of Benjamin), while the House of Israel they believe are the White British or Anglo-Saxon-Celtic kindred peoples of North-Western Europe today. http://en.wikipedia.org/wiki/British_Israelism

This entry was posted on January 9, 2012 by ASFC in Political Leaders, Politics.