The Shriner’s traveling card reads: “In the name of Allah, Merciful, and Compassionate. I desire to visit a Temple or Shrine in many cities. He is a good man, patient, cultural of sterling worth. There is no conqueror but Allah. Authorized with power by the Imperial Council Ancient Arabic Order Lodges of The Mystic Shrine. Witness the deputy and representative of temples in the East. Mohammed traveled from Mecca in the South to the North in Medina. Please Allah, we shall travel every where in safety. Small things influence great. Do not travel in the heat of the day. Travel with your eyes and ears open. By the grace if Allah, we have found repentance. Politeness is small solver. Action is power. Everything is from Allah. There is no deity, but Allah”. [The Pyramid: A horn of the Price Hall Family of Ancient Egyptian Arabic Order Nobles of the Mystic Shrine of North and South America and its Jurisdiction, Inc. (Fourth Quarter Vol. Number 52-Issue No. 196, 1993), p. 6.]

Heads of State and Government:

Hundreds of entertainers, professional athletes, diplomats, astronauts, captains of industry, military leaders, civic leaders, state governors, provincial premiers, and ordinary men have been Shriners. These include the rulers of many lands, including the last King of Hawai‘i, four Presidents of the United States of America, cuatro (four) Presidentes de los Estados Unidos Méxicanos, a Prime Minister of Canada, and the Supreme Commander, Allied Powers (international occupation viceroy & proconsul), of the Empire of Japan, all of whom have been Nobles of the Mystic Shrine. 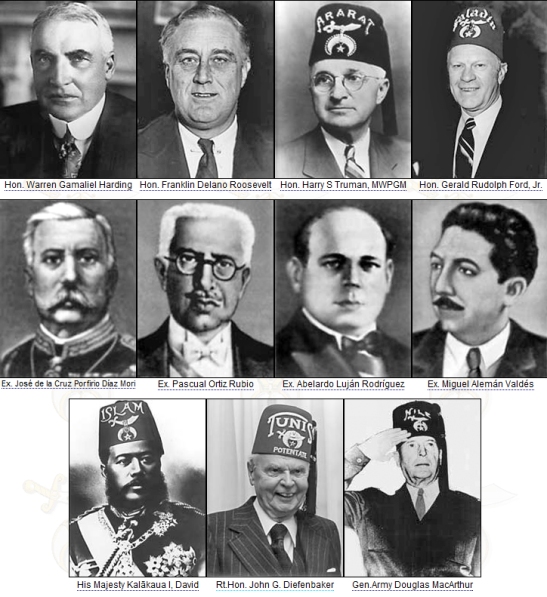 This entry was posted on September 6, 2011 by ASFC in Politics.