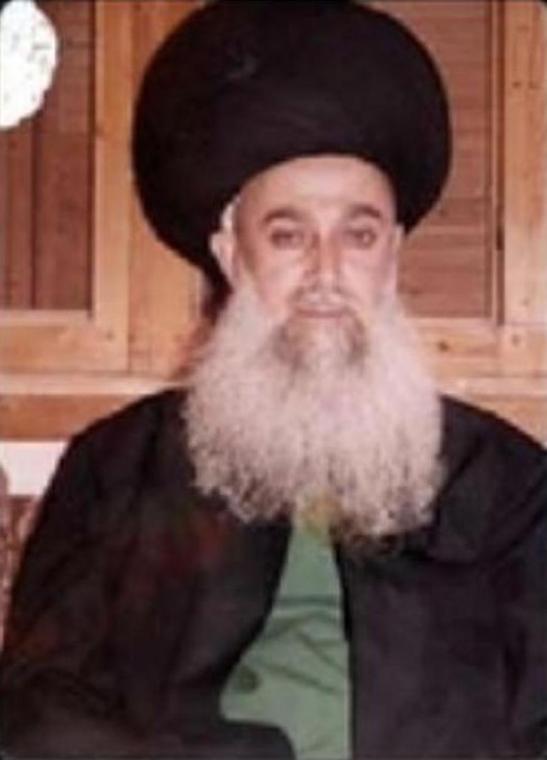 Mawlana GrandShaykh Nazim wearing the turban from the tomb of his grandfather the venerable Ghawth al-Adham Shaykh ‘Abd al-Qadir al-Jilani immediately after completing his seclusion in Baghdad, Iraq.

Mention of Mawlana’s account of his seclusion in Baghdad, Iraq at the mosque and tomb of Ghawth al-Adham Shaykh Àbd al-Qadir al-Jilani was recorded in the book The Naqshbandi Sufi Way by Shaykh Muhammad Hisham Kabbani in the following manner:

“One day I had a vision that Sayyidina `Abdul Qadir Jilani was calling me to his grave and he was saying, ‘O my son I am waiting for you at my grave. Come!’ Immediately I took a shower, prayed two cycles of prayer and I walked to his grave which was only some few feet from my room. When I got there I began contemplating and I said, as-Salam `alayka ya jiddee (‘Peace be upon you O my grandfather’). Immediately I saw him come out of the grave and stand beside me. Behind him was a Great Throne decorated with rare stones. He said to me, ‘Come with me and sit with me on that throne.’

“We sat like a grandfather with his grandson. He was smiling and saying, ‘I am happy with you. The station of your Shaykh, `Abdullah al-Fa’iz ad-Daghestani is very high in the Naqshbandi Order. I am your grandfather and I am passing to you now, directly from me, the power that I carry as the Arch-Intercessor and I initiate you now directly into the Qadiri Order.'”

When Shaykh Nazim had finished his seclusion and was about to leave, he went to Sayyidina ‘Abdul Qadir Jilani’s grave to say goodbye. Sayyidina ‘Abdul Qadir Jilani appeared in the flesh to him and said, “O my son. I am very happy with the states you have reached in the Naqshbandi Order. I am renewing your initiation to me through the Qadiri Order.” Sayyidina `Abdul Qadir Jilani then said, “O my grandson, I am going to give you a token of your visit.” He hugged him and gave him ten coins. Those coins were from the time he was living in, not from our time. Up until today, Shaykh Nazim has kept those coins with him…” [The Naqshbandi Sufi Way History and Guidebook of the Saints of the Golden Chain, Shaykh Muhammad Hisham Kabbani, KAZI Publications Inc., 1995]