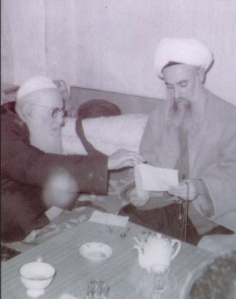 “Most Awliya’ had the excellences of Wilaya. For example, Qutbs, Awtad and Abdal were so. They are able to bring up the youth with ‘Ali’s (radi-Allahu ta’ala ‘anh) help.”-Maktubat i-Rabbani, Mujadid Alf Thani

In the Risala Qudsiyya, Khwaja Parsa writes while on his second trip to the Hijaz, the venerable Khwaja Baha al-Din Shah Naqshband ordered him to fix his blessed face in his imagination.

The venerable Mujaddid Alf Thani Ahmad Sirhindi stated in his Maktubat: “Tabarani and Hakim narrated from Ibn Mas’ud (radiyallahu anh) that our Prophet (sallallahu ’alaihi wa sallam) said: ‘Looking at ‘Ali is worship.’” The sanad of this hadith is hasan.” (Maktubat, volume 2, letter 36).

Muhammad Umar Birbali writes, “When a person reaches a certain station, people’s astral bodies can appear.  Someone with a connection (nisba) to the Prophet can manifest as if he were physically present”.  A disciple of Khwaja Hasan ‘Attar, the eldest son of ‘Ala’uddin ‘Attar (d. 803/1400), showed signs of spiritual attraction (jadhba) when visualizing the face of his shaykh. If the disciple could not be in the presence of the master, the venerable Mawlana ‘Abd al-Rahman Jami recommended that the disciple visualize the pir’s face in the heart while eliminating any distracting thoughts. The venerable Khwaja ‘Ubaydullah Ahrar, interpreting the Qur’anic verse “Be with those who are sincere and true” (kunu ma’ as-sadiqin [9:119]), indicated that one should outwardly be in the guide’s physical presence and inwardly have a bond with him (rabita). One unites sincerely with the shaykh’s face to develop continuous companionship with the lights of his lofty attributes and beautiful character, creating continual rabita, independent of physical proximity. In this way a person can develop an affinity (munasabat) with the mentor and arrive at the goal.

Imam Ahmad Sirhindi incorporated this practice of visualization into the Mujaddidi system, especially when he perceived that persons had not controlled their egos sufficiently. He would order them to engage in rabita and visualize his face in their hearts, causing them to show visible signs of spiritual attraction: “Khwaja Burhan, one of the shaykhs of Dahbid who had already been initiated and received permission to teach (ijazat) from the notables of his locale, asked Imam Ahmad Sirhindi for spiritual guidance. Khwaja Burhan was surprised when Ahmad Sirhindi said for him to visualize his [Sirhindi’s] blessed face. His trusted companion informed him [Khwaja Burhan] that this exercise is suitable for beginners so that they can be taught the advanced contemplations (muraqabat). … After being convinced, he practiced this exercise for a day and became overpowered with a connection (nisba) with God to the point that he showed signs of extreme spiritual intoxication (jadhba).”

Naqshbandi elders have praised visualization of the shaykh as an effective technique for concentration, since humans cannot follow two directions at once or meditate with distracting thoughts. Keeping the picture of the shaykh in the state of recollection of God (dhikr) is the essence of causing recollection (tadhkir) because the remembered One exists in the presence of one [the shaykh] who does not heedlessly leave God for an instant.