Aga Khan on Arabic as National Language of Pakistan 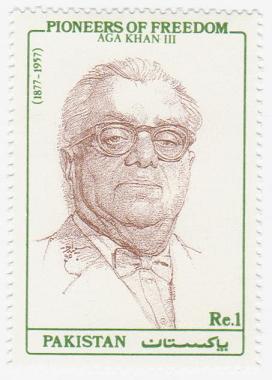 Pakistani stamp of Sultan Mahommed Shah, Aga Khan III, GCSI, GCMG, GCIE, GCVO, PC (November 2, 1877 – July 11, 1957) was the 48th Imam of Ismaili Muslims. He was one of the founders and the first president of the All-India Muslim League, and served as President of the League of Nations from 1937-38.

Sultan Muhammad Shah Aga Khan, the 48th Fatimid Imam for Ismaili Muslims at a session of Motamer al-Alam-al-Islamiyya on February 9, 1951 in Karachi said:

“I can assure you that it is not with a light heart that I address you this evening. I fully realise that what I am going to say will make me most unpopular with important sections of the population. However, I would be a traitor to Islam if I let this opportunity pass without placing before the people of this powerful and populous Islamic nation the views which I consider my duty to place before the Muslims with as many of the arguments as I am capable of using in a short address.

I fear some of my arguments will mortally offend those who under totally different conditions gave so much of their life for the support of the cause which I think today has been passed by events far more important than any dreamt of in those days. I feel the responsibility greater than any I can think of to place my views and arguments before the Muslim population of Pakistan as a whole – each and every province – while what I consider a tragic and deadly step is not yet taken and not added to the constitution of this realm.

The language of a nation is not only the expression of its own voice but the mode of interpretation with all other human societies. Before it is too late, I, an old man, implore my brothers in Islam here not to finally decide for Urdu as the national language of Pakistan but to choose Arabic. Please hear my arguments.

If what was the other part of the former British Empire of India had made Urdu its national language, there would have been a great argument for Pakistan doing ditto. It could have been a linguistic and important point of contact with the vast Republic of the South. I am the last man on earth to desire to break any bridge of contact and understanding between Pakistan and its immense neighbour. Not only Urdu but even Hindustani has been replaced by Hindi throughout Bharat as the national language. The people of Bharat were perfectly justified to choose any language which the majority considered most appropriate and historically justified to be their national language. The majority there has the right to choose what was most suitable for them as the official language of the country.

Your choice in Pakistan of Urdu will in no way ameliorate or help your relations with your neighbour, nor will it help the Muslim minorities there in any conceivable way. Howsoever you may add Arabic and Persian words to Urdu there is no denying the fact that the syntax, the form, the fundamentals of the language are derived from Hindi and not from Arabic. Was Urdu the language of the Muslims of India at the time of their glory? During the long Pathan period, Urdu was never considered the language of the rulers.

Now we come to the Moghul Empire in the period of its glory. It was not the language of the educated. I defy anybody to produce a letter or any other form of writing by Emperors Aurangzeb, Shah Jehan, Jehangir, Akbar, Humayun or Babar in Urdu language. All that was spoken at the Court was Persian or occasional Turkish. I have read many of the writings of Aurangzeb and they are in beautiful Persian. Same is true if you go to the Taj Mahal and read what is written on the tombs of the Emperor and his famous consort. Persian was the court language and the language of the educated and even till the early 19th century in far Bengal, the Hindu intelligentsia wrote and used Persian and not Urdu. Up to the time of Macaulay, Persian was the language of Bengali upper classes irrespective of faith and of official documents and various Sadar Adalat. We must look historical facts in the face. Urdu became the language of Muslim India after the downfall. It is a language associated with the downfall. Its great poets are of the downfall period. The last and the greatest of them was lqbal, who with the inspiration of revival gave up Urdu poetry for Persian poetry. There was a meeting in Iqbal’s honour in London organised by men such as Prof. Nicholson. I was present at that meeting. Iqbal said that he went in for Persian poetry because it was associated with the greatness of the Islamic epoch and not with its misfortunes. Is it right that the language of the downfall period should become the national language of what we hope now is a phoenix-like national rising? All the great masters of Urdu belong to the period of greatest depression and defeat. It was then a legitimate attempt by the use of a language of Hindi derivation with Arabic and Persian words to find ways and means of better understanding with the then majority fellow countrymen.

Today that vast British dependency is partitioned and succeeded by two independent and great nations and the whole world hopes that both sides now accept partition as final. Is it a natural and national language of the present population of Pakistan? Is it the language of Bengal where the majority of Muslims live? Is it what you. hear in the streets of Dacca or Chittagong? Is it the language of the North West Frontier? Is it the language of Sind? Is it the language of the Punjab? Certainly after the fall of the Mughal Empire the Muslims and Hindus of certain areas found in it a common bond, but now today other forms of bridges must be found for mutual understanding. Who were the creators of Urdu? What are the origins of Urdu? Where did it come from? The camp followers, the vast Hindi-speaking population attached to the Imperial Court who adapted, as they went along, more Arabic and Persian words into the syntax. of their own language just as in later days the English words such as glass and cup became part of a new form of Urdu called Hindustani. Are you going to make the language of the Camp, or of the Court, the national language of your new-born realm? Every Muslim child of a certain economic standard learns the Quran in Arabic, whether he is from Dacca or Quetta. He learns Arabic to read the Quran.

Arabic is the language of Islam. The Qur’an is in Arabic. The Prophet’s hadith are in Arabic. The highest form of Islamic culture in Spain was in Arabic. Your children must learn Arabic to a certain extent always. The same is true of your West whether Sind, Baluchistan or the North. From the practical and worldly point of view, Arabic will give you, as a national language, immediate contact not only with the 40 million Arabic-speaking people of independent nations on your West, but the other 60 million more or less Arabic-speaking people who are not independent but who exist in Africa. Right up to the Atlantic, not only in North but as far South as Nigeria and the Gold Coast, Arabic is known to the upper classes of the population. In all the Sudans, on the Nile or under French rule, Arabic is the language right up to the borders of Portuguese West Africa. In East Africa, not only in Zanzibar but amongst the Muslim population of even countries as far apart as Madagascar and Portuguese East Africa, Arabic is known. If we turn to the Far East, Arabic has prospered throughout the region inhabited by 80 million Muslims of Indonesia, Malaya and Philippines. In Ceylon, Muslim children of the well-to-do classes get some knowledge of Arabic.

Is it not right and proper that this powerful Muslim State of Pakistan, with its central geographical position, its bridges between the nearly 100 million Muslims of the East and 100 million Muslims of the West – its position of the East from Philippines and the Great State of Indonesia and Malaya and Burma and then westward with the hundred millions in Africa, right up to the Atlantic, should make Arabic its national language and not isolate itself from all its neighbors and from the world of Islam with a language that was associated with the period of downfall of Muslim States.

And finally, whi1e Arabic, as a universal language of the Muslim world will unite, Urdu will divide and isolate. Gentlemen, brothers in Islam, people of Pakistan, people of every Province, I appeal to you, before you take the final and what I unfortunately must say, I consider, the fatal jump down the precipice, please discuss and let all and every one contribute their views. Take time and think over it. Once more I appeal for Islamic charity from those whom I may have offended and I appeal to all others to look to the facts in the face both historically and as they exist at present. I pray that the people of this country may be guided by Divine Wisdom before they decide.”