Your holiness Mufti Saheb, I request your honor to give the verdict on the following questions, may Allah Ta’ala reward you.

Question 1: Is interest totally unlawful? On which condition is the profit considered as interest?

Question 2: May a Muslim take the profit on his deposited money in the banks and the post offices which they term as “interest” in countries such as India, Britain and South Africa, etc.

There is a Hadith in Muslim Shareef from the Holy Messenger (sallal laahu alaihi wasallam) which states that:

“No Riba (interest, usury) (exists) between a Muslim and a Harbi Kaafir in Darul Harb.”

This Hadith bears testimony that the property of a Harbi Kaafir is lawful for the Muslim at all times provided that he (the Muslim) must not commit faithlessness in his dealing. Accordingly, the great theologian, his holiness Shah Burhanuddin (alaihir rahma) states in his distinguished work, “Hedaya”, that:

“Though the Holy Quran has forbidden Riba, i.e. interest, yet this Holy Book of Allah makes the property of a Harbi Kaafir lawful for the Muslim.”

Likewise, there are so many verses giving evidence that the Shari’ah does not take a Harbi Kaafir in trust and so their property is permissible for the Muslim. Whoever, therefore, forbids the Muslim to receive such profits, deprives them of the benefit and causes the Harbi Kaafirs to take advantage, which is Haraam.

“Allah only forbids you, with regard to those who fight you for (your) Faith” [Al-Mumtahinah 60:9]

Answer 2: The excess money given by the banks and the post offices in the countries as mentioned, is legal for the Muslims, and is not (considered) as interest. It may be taken and used. 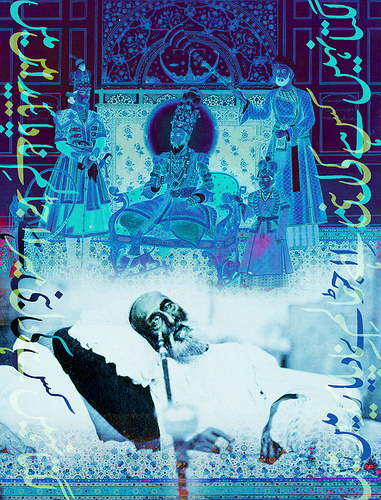 Footnote: In the famous authentic book of Hanafi Islamic Jurisprudence, “Hedaya”, translated by Charles Hamilton, in Chapter 9 (Book of Sale), pg. 293, the Scholar, Allama Shah Burhanuddin (alahir rahmah) states: Usury cannot take place between a Mussulman and a hostile infidel in a hostile country. This is contrary to the opinion of (Imam) Aboo Yoosuf and (Imam) Shafei, who conceive an analogy between the case in question and that of a protected alien within the Mussulman territory. The arguments of our four doctors upon this point are twofold. FIRST, the Prophet has said, “There is no usury between a MUSSULMAN and a hostile infidel, in a foreign land.” – SECONDLY, the property of a hostile infidel being free to the MUSSULMANS, it follows that it is lawful to take it by whatever mode may be possible, provided there be no deceit used.

The additional amount that is given by the Bank is termed as “Interest.” But, the Islamic concept of “Riba” is not applicable to the term “Interest” that is utilised by the Bank. According to the definition of Riba and with reference to the Hadith, “Interest” is not applicable when the dealing is between a Muslim and a Harbi Kaafir in Darul Harb. Muslims should erase the thought from their minds that this is “Riba.”

In the light of this Ruling, to accept and utilise this amount is permissible. But if a person, out of his her own personal discretion, does not feel totally comfortable in using this money should then advance this money to any other Muslim or an organisation without making any intention of receiving Thawaab.

It is important that this amount not be left abandoned in Banks. Let this money be utilised for the welfare and benefit of the Muslim Ummah.

It is also noteworthy to mention that Muslims in India have requested the Ulama there to tackle the issue of “Interest” as Muslims left large amounts dormant in Banks and the Banks were in turn donating these large amounts to Christian organisations who were using this money to do missionary work, build Churches and Missionary Schools. The Ulema and Muslim Scholars researched this issue and arrived at the above solution.